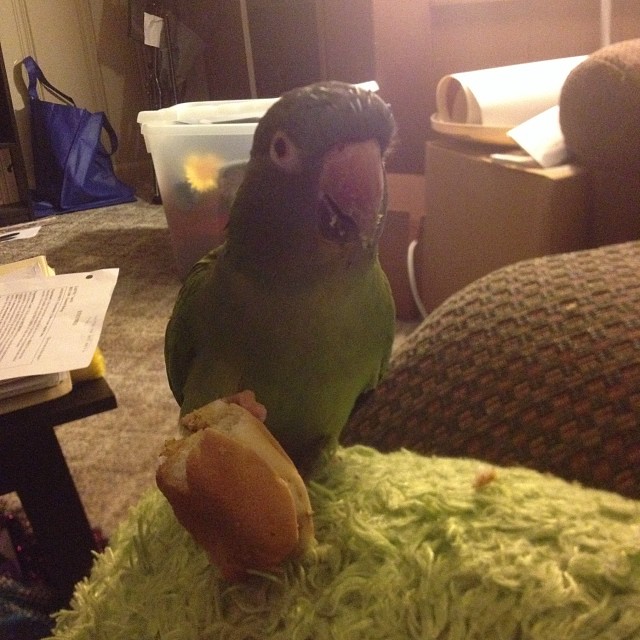 Blue-Crowned Conures, Aratinga Acuticaudata – what are these medium-sized conures really like as pets, and what are the pros and cons of owning one? Today, guest blogger and Dragon-tamer (er, I mean, conure owner!) Jennie Huntoon explores these questions in an effort to help new owners figure out if a blue-crowned conure might really be the parrot for them.

As ever, the aim of this ongoing guest series is to provide real owners’ stories about life with specific kinds of birds (in this case, blue-crowns). If you would also like to be a part, feel free to get in contact! Students with Birds always welcomes submissions.

And without further ado, here are Jennie and Dragon…!

Our journey begins on the day before Thanksgiving, 2006, with a girl of eighteen and a blue-crown conure of six months. It was love at ﬁrst sight, through the glass of an avian complex at a Petco in Maryland, as the bird tried to step up through the glass onto her ﬁnger. The attendant let him out; he stepped onto her hand without hesitation, clicked his approval, and pooped.

Fast forward a little over seven years, seven hundred miles, and eighty million poops (a conservative estimate) to the present day, where the girl and the bird are still just as inseparable as the day they met.

Ladies and gentlemen of the internet, please allow me to introduce you to Dragon!

And, well, myself, I suppose. But you donʼt come to this blog to learn about not-quite-twenty-six-year-old composers, or graduate students in the music department at Eastern Illinois University.

Jennie Huntoon, at your service.

I can tell you right upfront that if youʼre in school right now, or if youʼre heading off to school in the near future, youʼve got some doubt in your mind about having birds. Maybe you have a bird, maybe you want one. Iʼll bet thereʼs at least one person in your life telling you to that school plus birds doesnʼt work. Your twenties is a turbulent time!

“You donʼt know where youʼre going to end up!” “Youʼre not responsible enough yet to manage a bird on your own.”

Shhhhh. There, there, naysayers. Itʼs okay, I get where youʼre coming from.

Birds are high maintenance, messy, loud, moody, expensive, and most of them are a lifetime commitment. Hell, one of the most prominent rescue organizations back home will automatically turn away anyone that tries to adopt a parrot in need of a home if that person is under the age of thirty. Iʼm sure itʼs not the only one. Their concerns are valid, and accurate in some cases.

However, dear internet friends, I assure you that if you possess the responsibility and the dedication, itʼs doable and so very worth it. You wouldnʼt believe how strongly a human and an avian could bond until youʼve done it yourself.

Take, for example, the day one summer that my dad woke me up after rescuing a baby chickadee from underneath the tire of the car. He left it in my charge. Halfway through the internet search for wildlife rehabilitators in the area, I looked over at the poor creature and it had died. I sobbed, of course, as my brother took care of it outside for me. Then there was a rufﬂe at my shoulder – Dragon had climbed onto the couch, silently, until he got to his favorite place to sit. “Good bird,” he said softly, rubbing his beak on me. “Pretty bird. What a good bird” – as if to say, “Itʼs okay. I know youʼre good at taking care of birds.”

He always knows just what to do to cheer me up.

But I digress. Iʼm supposed to be telling you about life with a blue-crown conure, but itʼs difﬁcult to make such generalizations when our story is a bit unique. Counting my parentsʼ house, weʼve lived in seven different places over the past seven years. (2010 was rough.) People have come and gone in our lives – past housemates, boyfriends, neighbors. Cockatiels entered the picture in late 2011 and early 2013.

At one point, after our house was broken into and I worried for their safety, he lived with our friend Nicole for six weeks while I stayed with my boyfriend just around the corner. When we moved to Illinois, it was with boyfriend (who, granted, wasnʼt much of a big life change since Dragon loved him since day one). Thanksgiving break, we broke down halfway home and had to spend a couple of hours sitting in a Goodwill to keep Dragon out of the cold. Every time thereʼs a new place, a new face, or a bunch of boxes sitting around the cage, heʼs pretty much unfazed. He had the time of his life in that Goodwill making friends with the patrons.

Even the six hundred and ﬁfty three miles down interstate 70 to our new home was an adventure (until he got bored, but even then the screaming wasnʼt too bad).

The point is, if your bond with your bird is strong enough, not only can you make it work, but itʼs second nature. Moneyʼs tight? You donʼt think twice about not eating out for a month so that you can get the good brand of food. Dream apartment doesnʼt allow pets? No thanks, not worth it. Something is wrong in the middle of your work day? You take a half day unpaid without question.

It goes the other way, too, from the birdʼs point of view. Oh, weʼre moving again? No big deal, as long as weʼre still together.

I suppose it helps that I got him so young – he went from breeder to pet store to me, unlike some of the birds you may encounter that may have had multiple homes. But that just demonstrates how important it is that birds have forever homes – the bond of trust is unbreakable.

So, whatʼs life like with a blue-crowned conure? Hilarious. Wonderful. Sometimes, a pain in the ass, but very much worth it.

Conures vary in size – Iʼve met some green cheeks that are probably about half the size of Dragon. Iʼd say your average blue-crown is about the size of your average Senegal parrot, with a longer tail. I read somewhere on the internet that conures have the highest decibel scream of any captive species, sun conures being the worst. Having met a few of the smaller species of conure, Iʼd venture to guess that the blue-crown plays a close second to that.

If the windowʼs open, you can hear our parrot a block away. (It is frankly a small miracle that of all of the small apartments Iʼve ever lived in, we have never received a noise complaint. Not once. You may not be so lucky, so beware.) However, blue-crowns are also the best talkers of any conure species. Dragon knows at least ﬁfteen phrases off the top of my head, and he strings them together sometimes. Heʼs really smart, too – after after about two or three days of training, he learned to associate saying “come on” as what will earn him a treat, not screaming. Later, using the same techniques, now he says “come see me” when he wants attention.

Blue-crowns are curious as anything. Dragon loves to chew and he loves to rub his beak on things to see what kind of noise it makes. (Heʼs doing it on the laptop right now.) Heʼll get into anything he can – recently heʼs ﬁgured out that he can climb down the back of his cage to get onto the kitchen counter and chew on whatever homework Iʼve left there.

They are super smart, but you know, still a bit bird-brained: when we lived with my parents, they had two couches opposite each other. Iʼd be sitting on one, and he would ﬂy into the room and land on the other – then scream at me until I got up from across the room and picked him up! I think in close proximity he forgot he could just ﬂy again.

Despite the incriminating photographic evidence, he really is overall quite well-behaved. The mess is about average for a bird of his size, Iʼd say, but we do have to watch out for him putting holes in our clothes. Heʼll scream at the usual times: when he wakes up in the morning, when he wants to go to bed, when that damn squirrel is on his lawn again, and anytime one of us either leaves or comes home. Iʼm convinced sometimes he just likes to hear himself talk – he goes on for upwards of 45 minutes sometimes! 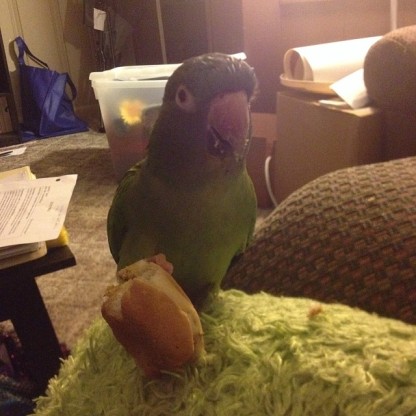 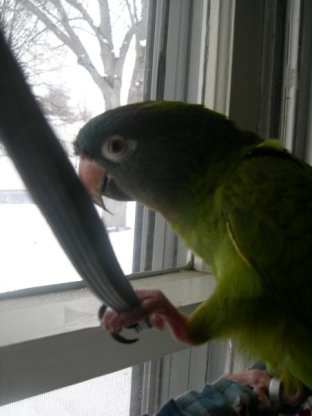 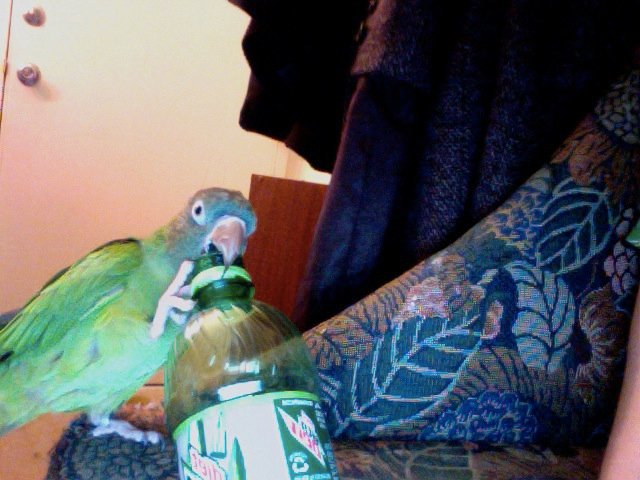 Blue-crowns are incredibly playful, too. He swings his bell toy to make the noise, then gets mad when it swings back and nudges him. Or, heʼll pull the clapper out of the bell, but swing it anyway and get confused when it doesnʼt make a sound anymore. He loves wooden, colorful toys; I have to buy toys designed for a slightly larger bird, because he will go through things marketed for conures in a day, maximum. He ﬁnds his own entertainment, as Iʼm sure youʼve gathered – plastic bottle caps, pieces of paper, and once, he discovered that if he grabbed one of the cockatielsʼ tails with his beak, he could make her run in place. I about died laughing that day. Heʼs scared of millet, but he loves the hair dryer/vacuum noises, and heʼll “sing” along to me practicing or playing music.

Heʼs not really a fan of children – my sister is fourteen now and heʼs only really warmed up to her in the last year or two – so if you live with kids, a blue-crown might not be a good idea. Iʼm not planning on procreating anytime in at minimum the next ﬁve years, if ever, so I suppose Iʼll cross that bridge when the time comes.

Our conure is kind of like a child himself; if he doesnʼt get a couple of hours of attention today, he gets pretty cranky. Fortunately, the attention can be low maintenance: if I set him on my shoulder and set to studying or even playing a game, heʼs happy. Sometimes heʼll go after my pen/ headphones/controller/phone/whatever Iʼve got that is distracting me from gazing upon his glorious presence, but sometimes, like right now, heʼll sit and preen, or talk, or entertain himself somehow.

So, yes, if you have an adequate living space and possess the capability to put up with mess and high decibel noise, even if youʼre in school right now – and you are committed to keeping a bird for the next thirty years or so! – blue-crowns as a species come highly recommended from me.

Every bird is different, of course – and the key difference is going to be the bond that you cultivate with your bird early on. That makes all the difference, though, and Iʼve never found him to be a burden on any facet of my life. Iʼve been able to go out and enjoy my twenties, take the occasional overnight trip (so long as I give him extra attention the next day!), host dinner parties, and hell, move halfway across the country to pursue my mastersʼ degree – and my parrot is still just as happy and well-adjusted as ever.